On Mobilegeddon and Why Analytics > Opinions

I planned to be silent about Google’s announced mobile algorithm update for several reasons:

First, I’m not a news source, so I leave revealing of news to those better equipped to break stories (Search Engine Land being one of my favorites).

Second, I didn’t see what the big deal was. Google is prioritizing mobile friendly websites in mobile search results. About friggin’ time! Personally, my mobile search history is approximately 95% looking up names of movie characters. Whatever gets me closer to the answer of “who was that guy in that movie” is aces in my book.

Third, pundits were insufferable with their proclamations and predictions that this change would be bringing on a form of apocalypse for websites that were not mobile friendly.

These pundits went as far as to “invent” “clever” terms for this effect, with the term Mobilegeddon becoming a call sign for the end of the world for websites that failed to embrace mobile.

Let’s set aside how insulting this term is to fans of Bruce Willis movies, my biggest problem is that all of this hype was based entirely on speculation. This lead to opinion pieces and blog posts from people who have no idea what they are talking about.

Your opinions don’t matter, only data

There were thousands of articles written about the Google mobile algorithm update over the past few months. Many of them made the same empty claim:

“If you don’t have a mobile friendly website, you are screwed.”

That is a natural reaction, of course, if you have never viewed a web analytics report in your life.

Since the update last week, I have noticed a significantly lower volume of pundits weighing in about this change. Why? Because they are probably embarrassed.

As of now, the Google mobile friendly update was underwhelming compared to the surrounding hype.

If we saw value in mobile, we would have done something about it

Earlier this year I shared an embarrassing slide in a presentation. One of my websites had become a bloated mess. Here was my report card from GTMetrix.

I hated seeing these numbers, but that site was converting traffic into free memberships at an excellent rate. 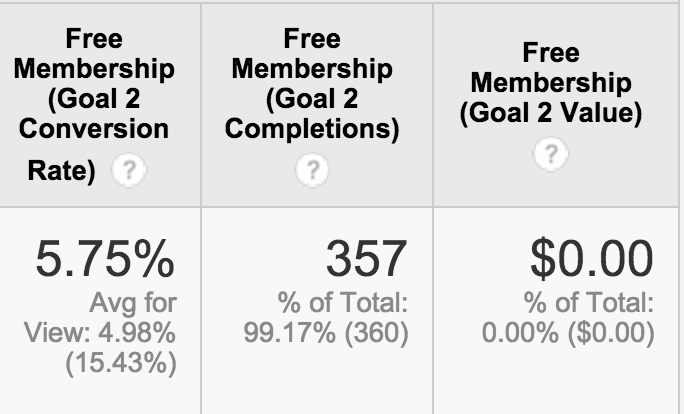 This caused an internal dilemma:

Well, I took the approach of: if it ain’t broke, don’t fix it. Sure, I could improve these results with focus. But what if it made things worse? What would be the opportunity cost of redesigning a website?

The numbers told me that I should stick with what was working and focus my efforts on other aspects of the business.

Side note: This conversion rate was likely high due to the traffic being sent to the site being highly qualified. I have a terrible rate of free conversions to paid customers, but that’s another story.

I decided to do nothing.

How do you know when you should care about the Google mobile rollout?

Not long after I showed that slide, Google announced the mobile friendly update. As we all should do, I ran several sites through Google Page Speed to see how I was doing.

That same site that got a D grade above got an amazing 0/100 rating from Google PageSpeed! 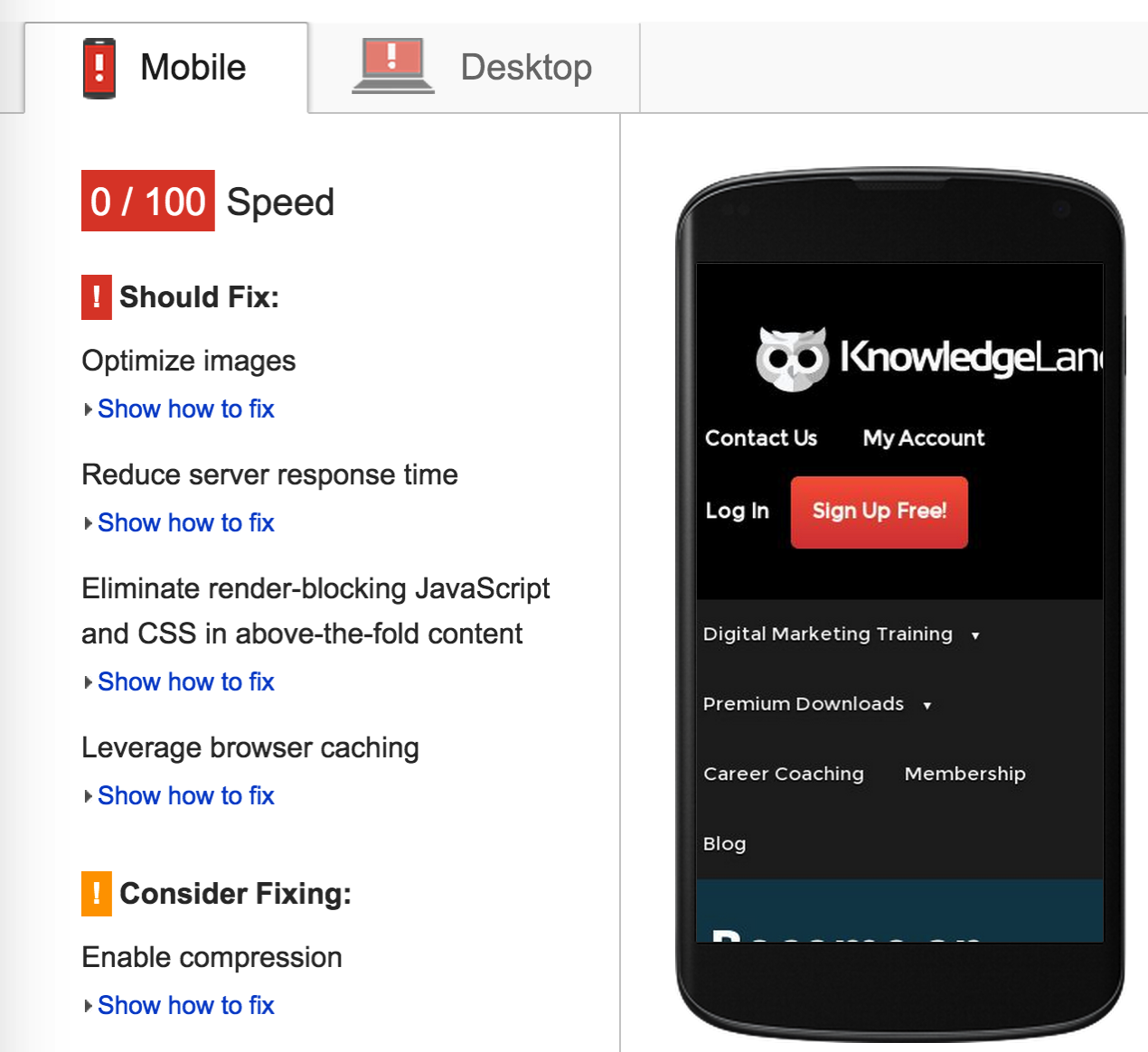 Nevermind that this grade is the result of using OptimizePress as my homepage. Forget that I wrote a post earlier about how much I love OptimizePress for a minute.

I had a serious problem on my hands.

My site was slow as shit.

I had 2 months to get it all fixed.

And yet I did nothing.

I had bigger things to worry about.

Consulting your analytics to decide where to take action

Most digital marketing departments are overwhelmed. There are too many advances to keep track of, and there is not enough resources to get everything done.

I am in the same boat. As a one-person marketing department for multiple sites, all that needed constant attention and focus. There just wasn’t time to get it all done.

So I took an analytics based approach to the problem.

For the site that GT Metrix and Google Pagespeed hated, users still liked enough to give me their email address more than 5 out of 100 times.

But how was this site performing on mobile? 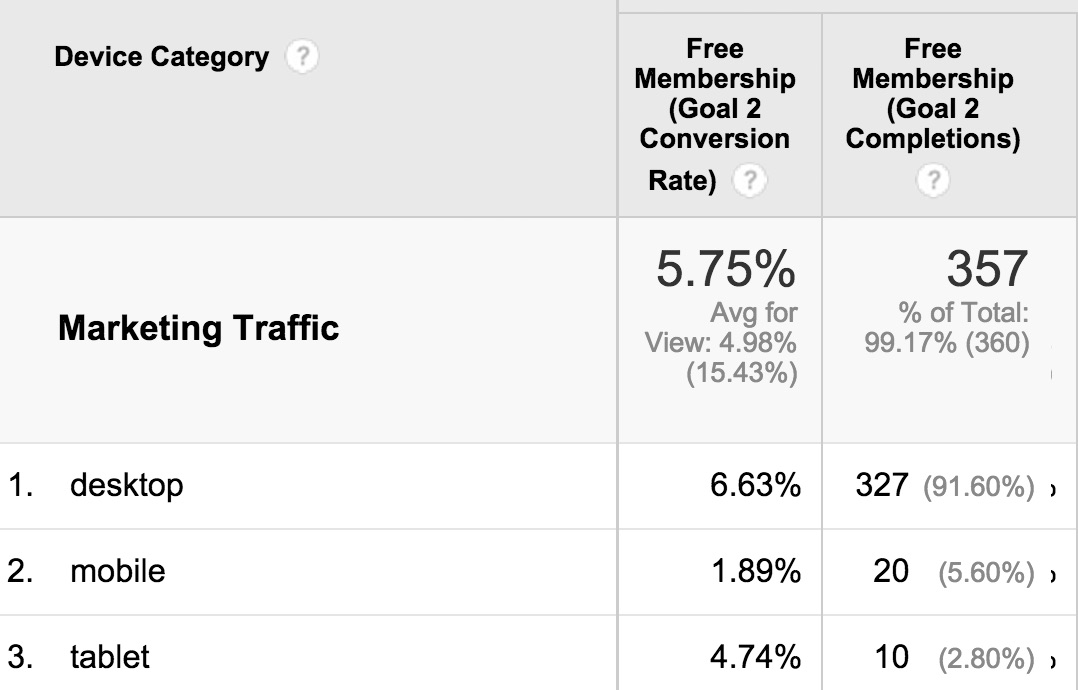 20 people visited this website on a mobile device and gave their email address. That is a very small percentage of overall visitors, and the conversion rate is much lower than the desktop or tablet sites.

So I should drop everything and fix it, right?

That is one option. But is it the right option?

Let’s continue to frame up the problem.

What are we really losing by having a website that is not mobile friendly?

Again, understanding that we have limited resources to fix all that is wrong with our website, let’s try to understand the impact of a potential mobilegeddon for our site.

I do this by segmenting out just mobile traffic from organic Google search. For this source, we had 8 conversions over the course of 4 months.

Two people gave us their email address after coming in from Google searches each month. That is hardly the sign of armageddon. Sorry Bruce Willis, but you’re still not needed.

Also, Google still ranks the website for brand searches (with sitelinks) on mobile sites as I write this.

Taking an analytics based approach, it is easy to see that by doing nothing, I actually did the right thing.

There is an easy counter argument we can make to my analytics driven approach to mobile. That would be that if I were to have embraced mobile earlier, then there is a good chance that I would be seeing better numbers today.

This is a fair argument. Had I embraced mobile earlier in the process, the results may be better. This could mean more traffic, a higher conversion rate, or both.

Could a sound mobile strategy and solid execution have doubled my total number of leads? Could it have changed the face of my business?

Or, it may do nothing at all. We simply don’t know.

I’m not the only one with this problem. I would say that they biggest issue businesses have is deciding when is appropriate to go “all in” on mobile.

Many small businesses have barely dipped a toe in the water… and there is little confidence that jumping in would be the appropriate move.

I chose to ignore Mobilegeddon because I have limited resources. Not only that, but I have even decided to consolidate my website presence into one single website instead of several branches. Providing a separate treatment for the mobile version of this website would be creating another branch that needs to be maintained.

Bringing this all back to why I dislike the mobilegeddon moniker

Let me preface this example by saying that I am going to share posts from an industry source I deeply respect. I am not calling out individuals or websites, they are just doing their job.

Here is an excerpt from Danny Sullivan’s update on the winners and losers of Mobilegeddon.

Popular news sharing site Reddit, NBC Sports, Vogue, SongLyrics and Bloomberg Business. I suspect a bunch of people at Reddit are about to lose their minds over this. But the Reddit home page as mobile friendly, and that could be true of many other pages inside the site, as well.

What exactly did these websites lose?

We may be able to track search visibility and say they lost. We could even use this to infer mobile traffic numbers. But we have no clue on how many conversions they missed.

Maybe they found that mobile traffic converted poorly and decided not to take action?

Maybe they see no business value in mobile. Or they don’t see any value in investing their limited resources to solving this potential problem.

Maybe our numbers are wrong, and they haven’t noticed a loss in search traffic at all?

We simply don’t know, nor are we equipped to speculate without access to proper analytics data.

Mobilegeddon was hype at its worst

So what did Google announcing its mobile update 2 months early do for the world of search? Not much in terms of actual search results.

Probably not much from a conversion standpoint, either.

What it did was generate a lot of noise in an already noisy field. It provided an endless stream of content filled with bold claims from pundits.

But I doubt it did anything to change the way most businesses operate. I'm not even sure it created many new believers in the mobile revolution.

The truth is that mobile marketing is in its infancy. What we need for widespread adoption is a good use case for small/medium businesses to care about mobile. We need examples of how companies (not mobile apps and game companies, mind you) have changed the face of their business by going mobile.

These are the stories that will get people to listen.

I am eagerly waiting for that day. For my own curiosity and my own business gain. Until that day, I am just relieved that we have retired the mobilegeddon term.

Hopefully we still have a few years until #watchgate.